Over the past few years (and after thousands of bike and run miles), I've battled with a mild case of Restless Leg Syndrome. Typically for me, it presents at night, when I'm in bed and just dozing off. Suddenly, this difficult to describe tingling/spasm feeling pierces my leg around the knee causing a jerky, unconscious reflex of my entire leg. Only my right leg is affected. And, while it doesn't hurt, it's annoying as heck because I lose precious sleep.

Doctors told me to try eating more bananas and/or drinking more orange juice as potassium deficiency is a likely cause. These recommendations didn't help.

For two months now, I've been eating a bowl or two of Special K cereal each morning and guess what? No Restless Leg episodes!

I began eating Special K on a whim--Vons grocery store had a big sale--and the Nutrition Facts on the side of the box impressed me (high protein, many vitamins and minerals, no saturated fat). Curing RLS was not even in the realm of consideration. 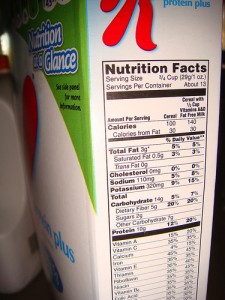 After eating Special K for two weeks, I realized I had not experienced a Restless Leg episode for about the same period of time. "Odd", I thought as I tried to figure out what I was doing/eating differently over the last fortnight. Workouts were the same intensity and length; recovery and sleep was the same; and my diet was identical. Then it dawned on me...Special K!

What's so special about Special K? My guess is that the 10%RDA of Selenium or 45%RDA of Iron are the magic "bullets" for my legs as deficiencies of these two essential minerals are known causes of RLS. (Selenium, a valuable antioxidant, is rarely found in cereals; and most cereals contain a much lower amount of Iron.) In fact, Special K contains so many beneficial nutrients, vitamins and minerals that I personally believe it could be one of the better cereals for all athletes to consume--with or without RLS.

Give it a shot and see how your workouts and recovery are affected. It tastes pretty good and I also like the relatively significant protein per cup (6 grams)--in addition to the Selenium and Iron supply.

Note: With all this praise you might think the "K" in Special K stands for Kaese. Let me assure any skeptics that AthleticMindedTraveler.com and its personnel have no business relationship with Kellogg's and have received no compensation. As always, our recommendations are objective and based upon personal experience.

I’ve had the same luck with Cheerios but haven’t done it on a regular basis, so I suffer.  Will try a daily bowl of SK & hopefully that will help!!

We've also heard from othe athletic-minded travelers that Natural Calm is worth trying. This is the Amazon link.

How can i get special k cereal? From nigeria

Really? If you can't order from abroad, look to a magnesium supplement. Take a look at Natural Calm -- as an example. You may not be able to order this exact product, but we think you can get something similar. It is also known to help. Here's the link: http://naturalvitality.com/natural-calm/

It's recommended by both MDs and nutritionists.

Great article! My dad has been suffering from this for years and it drives me mom bonkers because they both lose sleep! I will suggest this to him and see if it works. Thanks for posting!